CAN DO Student Action Committee delivers items for 13th annual Operation: CAN DO drive 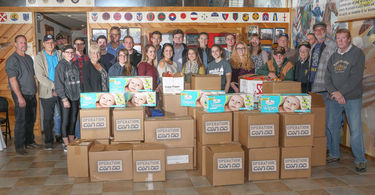 The CAN DO Student Action Committee delivered a collection of dozens of boxes of items to the American Legion Post 473 in Freeland Thursday as part of the 13th annual Operation: CAN DO drive.

The collected food, entertainment and personal hygiene items will be used to create care packages that will be delivered to soldiers, sailors, airmen and Marines serving abroad who have ties to Greater Hazleton. Numerous school groups, businesses and individuals from throughout Greater Hazleton participated in the collection of the items.

Charles Burkhardt, Student Action Committee co-adviser, thanked the community for its generosity to this year’s Operation: CAN DO drive and urged community members to share the names and contact information of any military members with ties to Greater Hazleton.

Those with family members or friends serving abroad who would like their relatives or friends to receive one of the packages can submit names and contact information to CAN DO, c/o Nancy Stasko, 1 S. Church St., 200 Renaissance Center, Hazleton, PA 18201. They may also call 570-455-1508 or email This email address is being protected from spambots. You need JavaScript enabled to view it..

Operation: CAN DO began in 2005 as an idea that was mentioned by one of the students during a Student Action Committee meeting. The students wanted to find a project where they could help the community and began by reaching out to schools for donations. The drive has since branched out to include donations from businesses and the community.

CAN DO President Kevin O’Donnell said, “This annual Operation: CAN DO drive would not be possible without the partnership we have with the Freeland American Legion. On behalf of CAN DO, I’d also like to express our gratitude to everyone who organized a collection or made a monetary donation to help us honor our military members.”

The CAN DO Student Action Committee helps coordinate several programs and events in the community. One of those events is the annual CAN DO Community Christmas, which will be held Dec. 6 at 6 p.m. at Christ Lutheran Church in downtown Hazleton.