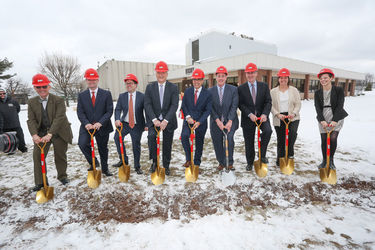 The new jobs at Hershey’s Hazle Township facility are expected to pay between $17 and $22 an hour. Company officials said the positions will include production operators, HVAC specialists, maintenance mechanics and controls specialists.

State Senator John Yudichak was among area legislators or their representatives who were on hand for the groundbreaking. He thanked Hershey for increasing its investment in manufacturing in the state and spoke about the impact it will have on the local community.

“There is only one thing sweeter than Hershey’s chocolate and that’s the sweet sound of manufacturing jobs being created in Pennsylvania,” Yudichak said. “We want to create these good manufacturing jobs but we can only do it if we have a company like Hershey that recognizes when you invest your hard-earned capital in Pennsylvania workers, it always pays dividends and it’s paying dividends today for Greater Hazleton.”