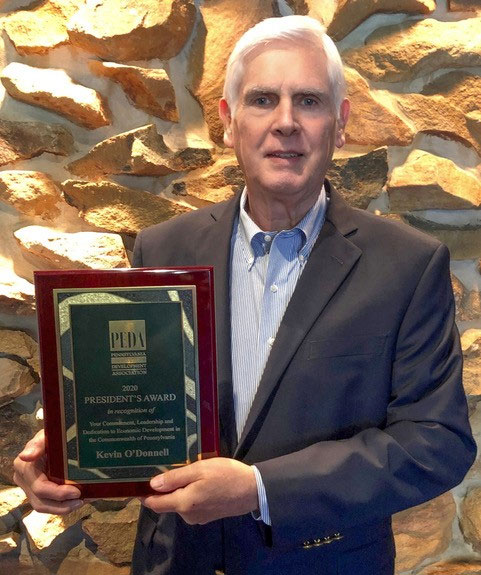 CAN DO President and CEO Kevin O’Donnell received the prestigious President’s Award from the Pennsylvania Economic Development Association (PEDA) during the organization’s 2020 Virtual Conference Series event on Thursday.

The purpose of the President’s Award is to recognize an individual’s commitment, leadership and dedication to economic development in the Commonwealth of Pennsylvania.

“I want to thank everyone at PEDA who I’ve had the pleasure of calling my friends for so many years. I am so honored to be selected for the President’s Award. Listening to the list of past award recipients, it blows me away to be part of a group of people like that,” O’Donnell said. “It’s always great to be recognized for one’s accomplishments, but when it comes from your peers, it’s even more gratifying. I can’t say thank you enough to PEDA. Betty Slaton, who was once the president of PEDA, coined a phrase that I’ll never forget because I truly believe in it. She said, ‘Ours is a worthy profession.’ She would say this at the end of every meeting. I believed it then, I believe it now and I’m so proud to have been a part of the economic development profession for so many years.”

During the presentation, PEDA Board of Directors President Michael Grigalonis, of Chester County Economic Development Council, explained that the President’s Award is not given on an annual basis and is presented only to a worthy individual who the organization feels deserves special recognition for their work in economic development in Pennsylvania.

“This year we have a very special person to add to the list of past award recipients and that is Kevin O’Donnell. What an incredible career he’s had and I know he’s left a tremendous legacy in that area of the Commonwealth through CAN DO and CAN BE and the various industrial parks and really throughout the whole region in Northeast PA. Kevin is truly an icon and has been a gentleman throughout. I’ve always had a tremendous amount of respect for Kevin and I’m really pleased to present this award to him today.”

O’Donnell, who is retiring at the end of the year after 47 years of service at CAN DO, reflected on his career and his start at CAN DO under the organization’s first full-time employee, Joe Yenchko.

“When I began at CAN DO 47 years ago, I didn’t even know what economic development was but I’ve enjoyed an absolutely remarkable career and it’s become my life’s work,” O’Donnell said. “Over the years, I learned from the best. During those 47 years, I’ve had the honor of working with some of the greatest names in economic development, but none more gratifying than my first boss, Joe Yenchko. He was a pioneer in his own right in economic development. He became one of the first practitioners that ever went on to become a board member of the Pennsylvania Industrial Development Authority (PIDA), so it was quite an honor to work with Joe Yenchko.”

“PEDA has always been an essential part of my professional life. First and foremost, it’s kept me informed of what’s going on around the state with the Department of Community and Economic Development. But, even more, for me, it’s about the relationships and the friendships that I’ve built over the years that have provided the greatest value. Serving on the PEDA board afforded me the opportunity to be a part of some incredible meetings with people that I otherwise wouldn’t have had the opportunity to even get near to so I’m very grateful for that.”

O’Donnell went on to thank all the CAN DO staff members, including Director of Administration Nancy Stasko and Executive Vice President Joe Lettiere, as well as Board of Directors Chairman Bill Magnotta. “It always helps when you’re supported in what you do by talented people and I have to acknowledge the great work of my staff and the work they’ve done over the years. I want to say thank you to my staff for the excellent work you do for me. I especially want to recognize Nancy Stasko, who has been by my side for the past 25 years. I’m not sure where I’d be right now if Nancy hadn’t been by my side. I also want to thank Joe Lettiere, who has been with me for 20 years now. He’s the incoming President and CEO of CAN DO and will take over on January 1. I’ve already turned a lot of things over to him and he’s doing a fantastic job. Everyone should look forward to hearing some great things out of Hazleton as a result of Joe’s work.”

Michael Ross, the president of the Franklin County Area Development Corp., who has known O’Donnell for many years through their involvement with PEDA, also praised O’Donnell.

“Kevin has been iconic in the Northeast. I would rate him among the five best economic developers in the Northeast. No one has been a better ambassador for, or has exemplified, our profession more than Kevin O’Donnell. He’s been an iconic figure in economic development for more than 47 years and he is all things Hazleton. He’s been a friend, mentor and resource not only to me but also a number of people in our profession. We’ve learned tremendously from him and I’m privileged to call him a friend.