Brinn Gammer and Starling Reyes were recently recognized as winners of the Greater Hazleton Chamber of Commerce’s Young Innovator of the Year award for 2020 and 2021, respectively. The award is sponsored by CAN DO’s entrepreneurial arm, the CAN BE Innovation Center.

CAN DO Director of Economic Development Jocelyn Sterenchock said, “CAN BE is proud to sponsor this award that honors innovative young minds right here in Greater Hazleton. Brinn and Starling were just two of many talented young thought leaders from our local student population that I had the pleasure of working with over the past two years. Whether it’s connecting them to an organization like tecBRIDGE, a regional organization that champions entrepreneurship, innovation, and the knowledge economy in Northeastern Pennsylvania, or providing innovative programming locally through the Hazleton LaunchBox, it’s important to offer students access to resources like these.” 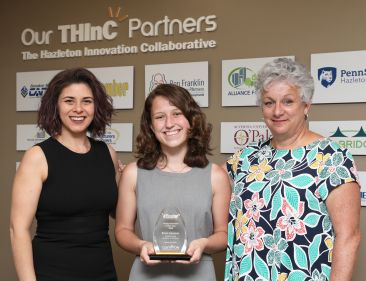 Gammer was named the 2020 Young Innovator of the Year for her victory in the tecBRIDGE Big Idea Essay Competition. The Hazleton Area Academy of Sciences graduate wrote about her community service project from high school, Unidas, for the competition.

“Along with other students from the Hazleton Area Academy of Sciences and the Hazleton Integration Project, I worked on a variety of initiatives to raise awareness for domestic violence and mental well-being,” Gammer said. “The Big Idea Essay Competition was a platform on which I shared my ideas for community service and activism.”

Now a rising sophomore and neuroscience major at the University of Pennsylvania, Gammer said she was excited to discover she won the award.

“I was surprised, to say the least! Because the 2020 and 2021 Innovator of the Year awards were awarded together, I didn’t find out until very recently that I had won. Though it’s been a difficult year for everyone, it was a fantastic surprise to return home from college this semester and find out about this honor,” she said.

Gammer said things like the Young Innovator of the Year award and tecBRIDGE competition inspire young adults to get more involved in the community.

“The beauty of the Young Innovator of the Year award lies in its scope: whether it be participation in tecBRIDGE’s Big Idea Essay Competition or Business Plan Competition, work at the Hazleton LaunchBox, or local efforts of any kind, young leaders can earn this award in a variety of ways,” she said. “It inspires students such as myself to work exceptionally hard in our involvements to help our community and the Hazleton area. Bridging these many works is a central theme of leadership and, of course, innovation.”

Gammer has been involved with tecBRIDGE since her junior year of high school and said she’s learned the importance of making connections and realizing ideas.

“At every event and competition I’ve attended, it is clear that “Big Ideas” are more than attainable, especially when given such amazing support and development resources. As I continue to create projects at my university and beyond, I cannot forget the salience of a strong network and the support of my community.” 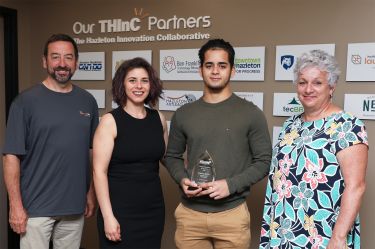 Reyes won the 2021 Young Innovator of the Year award for his work with the Hazleton Launchbox during its Youth Entrepreneurship program. He is a recent Hazleton Area High School graduate and will be attending Penn State Hazleton to study engineering.

During the program, Reyes created what he called a “revolutionary invention” named Arc Spark, which has been described as “a solution to what electric vehicle owners call ‘range anxiety’, or the fear they might get stranded if their battery runs out while on a trip.” Reyes said he plans to use what he learned during the Youth Entrepreneurship program in the future to make his idea a reality.

“I will use the skills that I learned throughout this program in my future because I hope to continue working with the Hazleton Launchbox as I become a student at Penn State Hazleton. I’m currently working with Mr. Andahazy and other members of Penn State to prototype and further develop this invention.” he said.

Reyes said learning he won the award was both surprising and inspiring.

“I was in shock and so thankful because I had not expected to receive this amazing award,” he said. “I think that getting this award will serve as an example that you can do great things no matter how young or old you are.”