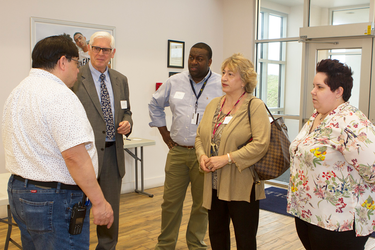 Vivian Williams, equitable transit project coordinator at the Scranton Area Community Foundation, gave attendees an update on plans for additional bus transportation routes for Humboldt Industrial Park. A survey was previously sent out via email to park employers and local staffing agencies seeking information on their bus transportation needs. Approximately 400 surveys have been returned so far.

Williams said that her organization is working on a pilot program with the Scranton and Jessup area, in conjunction with the Scranton Chamber of Commerce, to determine whether a regional transfer station that would connect Hazleton, Wilkes-Barre and Scranton is necessary or if companies just require more information about the existing bus routes into and out of the park.

“We have many options available to us and decisions are still being made based on the information we are gathering from these surveys. We are working to align shift times with the master routes and the survey results,” Williams said. “One of the biggest things we are learning from the surveys is that people don’t know how to use the transit line so more education on what is already in place may be necessary.”

CAN DO President and CEO Kevin O’Donnell said that CAN DO is very eager to work with the companies in Humboldt Industrial Park to implement more bus service for the park. “With unemployment rates where they are now, there is no better time than right now to get bus service upgraded in the park,” he said.

Humboldt Park Association President Brian Poveromo said he’s excited to see how the planning has progressed and the work being done to accommodate as many of the park’s companies as possible. “Although we can’t fit the routes to match every company’s start times, we are working to figure out how much flexibility we have. It’s very beneficial to the park that this survey is being conducted on a park-wide basis and not just with input from certain companies.”

Williams said several companies have already expressed interest in the program and that her organization can work with individual companies to coordinate a bus schedule that works best for them.

SHINE program director Carol Nicholas spoke to attendees about SHINE, a STEAM (science, technology, engineering, arts and math) project-based after-school education program for students in pre-kindergarten to 12th grades that is hosted by Wilkes University and funded through various public and private sources.

Students receive homework help and a meal and participate in two hours of project-based STEAM activity. Family nights are held at each center once a month. Children in pre-kindergarten and kindergarten participate in a home-visiting program, students in grades 1-4 attend an elementary center and those in grades 5-8 attend a career academy. Ninth through 12th grade students serve as high school mentors for the program. Additionally, 75 staff members from the six school districts assist with the program.

SHINE is designed to improve academic performance, student behavior and school attendance and also educates students on the career opportunities that are available in the area and the skills they will need to do those jobs. Teachers select students for the program who show potential to learn but need support and additional opportunities to be exposed to a STEAM-based curriculum.

Nicholas said, “SHINE prepares the students of today for the jobs of tomorrow. There are about 120 students in the Hazleton Area School District who participate in the program. Employers can benefit by visiting a school once a month and giving a presentation about their company to the students in grades 5-8. These sessions give children a chance to see what career opportunities there are in the area and what skill sets they need to learn to obtain a job in these fields.”

Plans are underway to host a STEM Olympiad where students will compete with projects that they built and showcase the culmination of the projects and skill sets they worked on throughout the year.

Nicholas said the SHINE program is showing significant results in the students’ academic performance. Sixty-eight percent of students have attended the program at least 30 days in a row. Teachers reported a 65 percent increase in overall academic classroom performance and a 75 percent improvement in areas such as homework completion, motivation and attentiveness. Eighty-two percent of science students and 70 percent of math students from the program received a final grade of a B or higher on their report cards. Overall, 100 percent of teachers felt that incorporating STEAM and project-based learning has a positive effect on students.

Nicholas added, “It’s exciting to go to work and see students so excited about learning. We’re trying to get them on a career trajectory to stay here in the area to work and continue their education.”

Continuing on the theme of education and workforce development, Kelly King and Cal Herring from the Keystone Job Corp spoke about the center’s work-based learning opportunities, which include internships and the Leisure Time Learning program. Both initiatives are designed to help Job Corp students learn employability skills while helping companies receive part-time help.

King explained that the program gives students a chance outside of the classroom to receive employment and practice the skills they learn at the Job Corp. “Students want to gain higher skills and experience. Throughout the process, they receive weekly feedback and evaluations on eight critical skills. With leisure time employment, we make sure we are making people’s lives better. The students get the chance to work and learn skills and the employer gets a trained workforce,” King said.

Through the program, the Job Corp provides scalable, local talent pools with hands-on experience aligned with industry standards. Students train and earn credentials in high-growth industry sectors. Students participate in work-based learning/internship opportunities that help to unlock career options after graduation. With work-based learning and internship opportunities, students can learn from real employers and get on-the-job experience to become workforce-ready.

In addition to the Keystone Job Corp programs, Standard-Speaker Operations Manager John Patton provided more information for companies looking to hire new employees when he announced an upcoming bilingual jobs tabloid the newspaper is producing as part of its Hazleton Today/Hazleton Hoy bilingual tabloid newspaper. The quarterly paper, which published its first 5,000 copies last year, currently has a circulation of nearly 11,000 copies.

In addition to being distributed at some Humboldt Industrial Park facilities, the paper can be found on newsstands, in local schools and at a variety of stores and restaurants throughout Greater Hazleton, among other locations. Patton urged any companies with upcoming openings to consider placing a bilingual ad in the jobs tab.

Patton also discussed the Standard-Speaker’s participation in coordinating a town hall meeting on May 23 to discuss the ongoing opioid epidemic in the area. The 90-minute event will be broadcast locally on WYLN-TV and will feature segments on treatment, prevention and recovery. This is the first of three planned in a series, with additional town hall discussions expected in September and November.

CAN DO Director of Operations Greg Kurtz provided updates on several projects in the park, including the White Birch Road extension project and work to reclaim former strip mining land in the Humboldt North section of the park.

Kurtz said CAN DO’s portion of the construction of the White Birch Road extension project is expected to begin in August. The project will create another entrance point to Humboldt Industrial Park and connect the park to Interstate 81 and Route 424.

Kurtz also said construction will begin this summer on a project to reclaim approximately 40 acres of former mine land in Humboldt Industrial Park North. CAN DO received a $2.6 million grant from the Bureau of Abandoned Mine Reclamation for the project and will use it to transport fill material from a 22-acre piece of land spread across two of its sites in the Humboldt Northwest section of the park to reclaim the Humboldt North property. This project will restore land that was previously used for strip mining and allow for additional site development in Humboldt North.