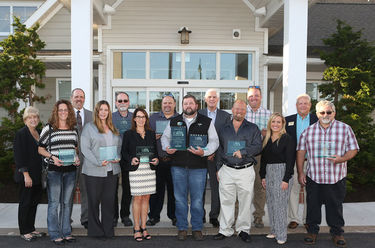 CAN DO held its 12th annual Curb Appeal Awards ceremony to recognize companies in its Humboldt, Valmont and McAdoo Industrial Parks, the CAN DO Corporate Center and Humboldt Station that create a vibrant and welcoming design to their facilities through their landscaping and grounds maintenance.

The awards were presented during an industry mixer held Thursday at Residence Inn by Marriott in Humboldt Station. The mixer was co-sponsored by Residence Inn and Coordinated Health.

Cargill Meat Solutions was named the overall Curb Appeal Awards winner for 2019. Vito’s Landscaping did the work at the company’s facility in the Humboldt Industrial Park.

In addition to Cargill Meat Solutions, recipients in the more-than-100 employees category are: Hershey Company, Cargill Cocoa and Chocolate, and Fabri-Kal.

CAN DO President and CEO Kevin O’Donnell said, “When CAN DO purchased the land for the Valmont Industrial Park more than 60 years ago, we set a precedent from the beginning that our parks were going to be the epicenter of business and industry in Greater Hazleton. But, we also made it our mission to preserve as much of the natural beauty of these areas as possible. We started the Curb Appeal Awards program because we felt that those companies who maintained their properties best should be recognized.”

O’Donnell thanked Nancy Stasko, of CAN DO, for coordinating the awards and mixer each year. He also recognized representatives from the award-winning landscaping companies and several dignitaries who were in attendance.

Committee members encouraged companies in all of CAN DO’s parks to begin reviewing their facility’s curb appeal in advance of next year’s awards.

“We want to thank all our sponsors. We appreciate their commitment to the Curb Appeal Awards program and to business relations in Greater Hazleton,” O’Donnell said.