CAN DO presented its ninth annual Curb Appeal Awards to its industrial park and corporate center tenants who have beautified and maintained the visual appeal of their properties.

A United States Air Force serviceman who received an “Operation: CAN DO” care package presented the CAN DO Student Action Committee with a flag that was flown in an aircraft during a mission over Southeast Asia.

Michael DellaVella, whose wife, Diane, is a Kelayres native, attended the CAN DO Board of Directors meeting earlier this month to present the Student Action Committee with the flag. He made the presentation to 2016 “Operation: CAN DO” co-chairs Jenna O’Donnell and Anthony Kimsal, Student Action Committee advisers Nancy Stasko and Charles Burkhardt, CAN DO President and CEO Kevin O’Donnell and CAN DO Board of Directors Chairman Dr. John Madden.

Representatives from Keystone Job Corps and Jim Kelshaw, CAN DO Director of Economic Development and Entrepreneurship, spoke to attendees of the recent Humboldt Park Association meeting about the programs and services available to businesses and industries in Greater Hazleton.

A Humboldt Industrial Park logistics company that operates from a 525,000-square-foot facility and ships hundreds of trailers of food products across the northeastern United States each week has been named one of the Top Green Providers for 2015 by Food Logistics magazine.

In 2009, Romark Logistics embarked on a mission to become a more energy-efficient operation and achieve the goals of reaching landfill-free status and eliminating its carbon footprint. Six years later, the third-party logistics company celebrated its sustainability efforts after receiving the recognition from the food logistics industry publication.

CAN DO announces business financing available with interest rates between 2.25% and 3.25%

CAN DO, Inc., the economic development organization serving Greater Hazleton and beyond, announced updated interest rate options for Pennsylvania Industrial Development Authority (PIDA) products and loans for the 2016 second quarter.

The new rates are in effect for loan applications received through June 30, 2016. 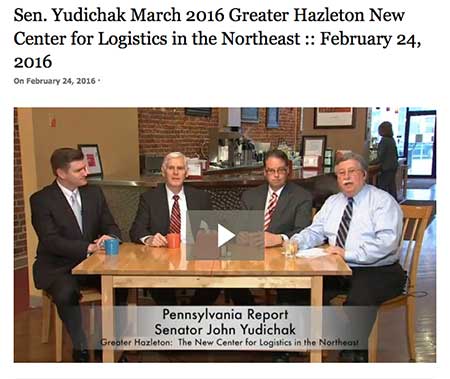 CAN DO President and CEO Kevin O'Donnell and Director of Economic Development and Entrepreneurship Jim Kelshaw recently sat down with Senator John Yudichak for a candid discussion on economic development in Greater Hazleton for the Senator's Pennsylvania Report segment.

For the 14th consecutive year, aspiring entrepreneurs will have a chance to compete for a share of $100,000 in cash and in-kind business service through the 2016 Business Plan Competition facilitated by TecBridge. The competition is open to students from the 14 area colleges and universities as well as non-collegiate teams.

Registration opened at the beginning of February and runs through March 17. The deadline to submit final business plans is April 1. Interested applicants can visit www.nepbpc.com for a registration form and complete competition rules.

Facilitated by TecBridge, the competition is endorsed by the Northeastern Pennsylvania Association of Colleges & Universities and supported by local Chambers of Commerce and regional businesses. CAN BE, the Community Association for New Business Entrepreneurship, has served as a sponsor of the competition for many years.

The Luzerne/Schuylkill Workforce Investment Board (L/S WIB) helped 12 companies, including four in CAN DO, Inc.’s Humboldt and Valmont Industrial Parks in Greater Hazleton, obtain a combined total of more than $50,000 in grant money through two programs that provide reimbursement to companies that run employee training programs.

The L/S WIB assisted the businesses in applying for the Make it in America grant and the Walmart Foundation’s Transportation, Distribution and Logistics grant. Grant programs like Make it in America and Transportation, Distribution and Logistics are authorized by the L/S WIB and administered at the local level by one of three PA CareerLink centers across the two counties. 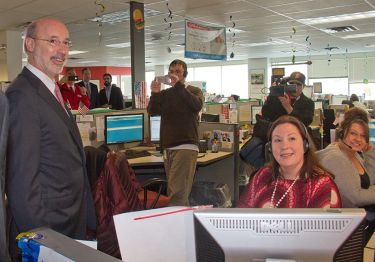 Pennsylvania Governor Tom Wolf  toured web.com in the CAN DO Corporate Center on January 15 after it was announced earlier this month that the internet company would be reshoring 74 jobs from the Philippines to Drums, PA. The Governor spent time walking through the facility talking with customer support and web design employees and then held a press conference with media.

Brian Poveromo, senior facility and maintenance manager at American Eagle Outfitters, was elected Humboldt Park Association president for 2016 and Chuck Cresap of Simmons Bedding Company was selected as vice president. Treasurer Tracy Karchner of Karchner Logistics and secretary Nancy Stasko of CAN DO will retain their current positions.