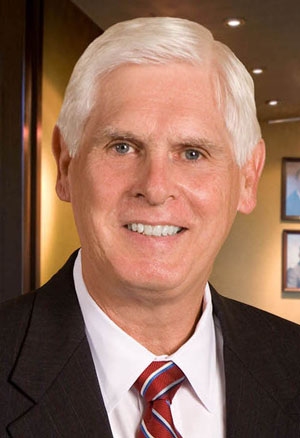 Kevin O’Donnell, who has led Greater Hazleton’s economic development growth for more than four and a half decades, today announced to the CAN DO Board of Directors that he will retire as President and Chief Executive Officer at the close of 2020.

O’Donnell’s name is one of the most recognizable names in economic development not only in Northeastern Pennsylvania but across the entire commonwealth. In fact, O’Donnell was recognized by his peers in 1984 as the first-ever “Economic Developer of the Year” by the Pennsylvania Economic Development Association.

O’Donnell started at CAN DO in 1973 as assistant director to Joe Yenchko, CAN DO’s first employee. He held that position until he was promoted to director in 1984. In 1995, the title was changed to president, a position he has held since.

As the leader of the economic development organization, O’Donnell has helped to bring regional, national and global companies to Greater Hazleton that have resulted in thousands of jobs and hundreds of millions of dollars annually for the local economy. In fact, more than 20,000 jobs have been created in Greater Hazleton, through CAN DO, since O’Donnell joined CAN DO.

During the past 35 years under his leadership, CAN DO has expanded or launched three industrial parks, Valmont, Humboldt and McAdoo; the CAN DO Corporate Center in Drums, and Humboldt Station, a commercial park located just off Interstate 81 at Route 924. Humboldt Industrial Park has become one of the largest industrial parks in Pennsylvania stretching five miles long and two and a half miles wide at its widest point.

CAN DO has been recognized for its innovation in economic development many times during O’Donnell’s tenure, most notably in 2007 when the organization was named “Large Agency of the Year” by the Pennsylvania Economic Development Association. In 1993, CAN DO received the Arthur D. Little Environmental Excellence in Economic Development Award, and in 2006 was awarded the Leadership in Energy and Environmental Design Award from the U.S. Green Building Council.

In addition to being named Economic Developer of the Year, O’Donnell has received several other economic development-related awards including the Ben Franklin Innovation Award “Special Achievement” for his contribution to the creation of the Great Valley Technology Alliance (GVTA). In 2009, O’Donnell was inducted into the Northeastern Pennsylvania Business Hall of Fame.

Having conceived the idea for it in 1992, O’Donnell was one of the founders of the CAN DO Community Foundation, a charitable organization which supports worthwhile community projects with the ultimate goal of making a positive difference to the present and future well-being of the Hazleton area. Since its inception, the foundation has initiated and contributed to numerous worthwhile community improvement projects throughout the Greater Hazleton Area.

In his letter to CAN DO Board Chairman Bill Magnotta, O’Donnell said, “I have been privileged to work with hundreds of community volunteers that have served on the CAN DO Board of Directors and have served under 16 presidents and chairmen of the board over those years.

“I am very proud of the fact that our organization has reached financial sustainability without land sales and that we are able to branch out more into community development like we are doing in our downtown with the acquisition and exterior restoration of the former Remember When building, our commitment to the CAN DO Community Park, our involvement with the arts center and our role in the new downtown incubator.

“It has indeed been an amazing journey and I am so grateful to this organization for giving me the opportunity to be a part of it.”

Speaking on O’Donnell’s announcement, Magnotta said, “Kevin has been the face of CAN DO for the past 46 years and has been instrumental in growing the organization into what it is today. Kevin’s relationships, knowledge of CAN DO, and overall experience will leave a void and will be a loss for CAN DO and our community as a whole.

“While the Governance and Executive committees have been preparing for the eventual retirement of Kevin, it is still hard to fathom CAN DO being run by someone other than him. I can only hope to continue to see Kevin in some capacity after his retirement helping CAN DO and the place he calls home.”

Magnotta continued, “Under Kevin’s leadership, CAN DO has become a multi-faceted company managing water & sewer utilities, land development projects, industrial park management, real estate investment, a small business incubator and so much more while fulfilling its core mission of attracting both small and large businesses and bringing thousands of jobs to the Greater Hazleton Area over his career.”

During his time with CAN DO, O’Donnell has always been a supporter and advocate of regionalism, understanding the importance of joining with Hazleton’s neighboring communities in order to compete in a global economy.

He serves on the board of directors of TecBRIDGE, an offshoot of GVTA, and the Northeastern Pennsylvania Alliance (NEPA) and is an incorporator and past president of Penn’s Northeast, a regional economic development marketing group serving a seven-county region. He has also served on the advisory board for the Ben Franklin Partnership of Northeast Pennsylvania and was an advisor to Penn TAP, the Penn State Technical Assistance Program.

For more than 13 years, O’Donnell was a member of the Luzerne and Schuylkill County Workforce Investment Board (WIB) and represents CAN DO on the steering committee of the Hazleton Partners in Education (PIE).

Magnotta added, “Kevin will be leaving behind knowledgeable and dedicated CAN DO team members who are ready to step up to continue his legacy in making Greater Hazleton the place to live and raise a family.”

During an interview for the organization’s 50th anniversary in 2006, CAN DO’s founder Dr. Edgar L. Dessen spoke about O’Donnell. “I can’t believe lightning struck twice. First, we got Joe Yenchko and then we got Kevin O’Donnell. Kevin is one of the best economic development officials anywhere in the state and one of the best in the country.”