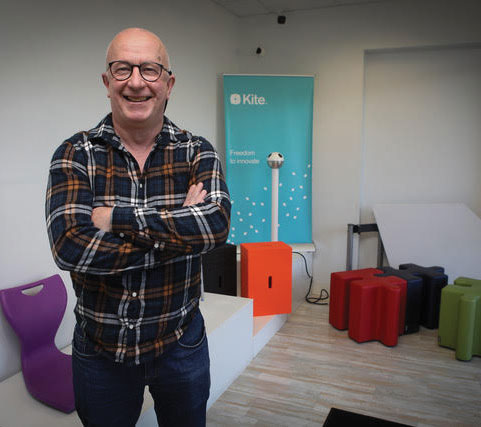 (Hazleton, PA – November 23, 2020) – Muzo, a flexible classroom learning and office solutions furniture company from the United Kingdom, has announced that it will be relocating its global headquarters and much of its manufacturing to a 74,000 square-foot facility owned by CAN DO in the Valmont Industrial Park in West Hazleton. For the past 10 years, Muzo has been manufacturing locally in a smaller facility in the CAN DO Corporate Center.

“We have chosen West Hazleton largely because of our ability to scale in terms of production. We are a growing business. We’ve established ourselves in this region and we like the people and we like the area, Muzo founder and CEO Darren Buttle said. “Transportation routes are great here and our east coast business is very, very strong. We sell worldwide and will be exporting from here to a number of regions around the world.”

CAN DO Executive Vice President Joseph Lettiere said Muzo’s announcement is great news for Greater Hazleton. “I recall ten years ago when I first met Darren as we were recruiting Muzo; his enthusiasm and vision to change the furniture industry were evident.  I’m grateful that he chose our community to make that vision a reality and, with Muzo committing to move its corporate headquarters here, I look forward to working with Darren and his team as they continue to grow their business and create family-sustaining jobs in Greater Hazleton. Understanding their plans for the facility, I am certain Muzo will bring added attention to the area,” Lettiere said.

Founded in 1999 in Yorkshire, UK, Muzo quickly grew and the company’s educational furniture offerings were shipping to countries across the globe including the United States. In fact, today Muzo distributes its furniture to 41 countries.

Muzo combines the best in British design with the best in American engineering and manufacturing, Buttle said. The company’s designs have become so popular that major corporations such as Google, Facebook and Coca-Cola are using Muzo’s furniture.

In 2010, the company launched one of its manufacturing facilities in the CAN DO Corporate Center in Drums. Buttle said he liked this region because it reminds him of Yorkshire.

He added that the company plans on expanding its workforce here by more than 50 people over the next 12-18 months. “We will grow as fast as we can find great people,” Buttle said.

Muzo has signed multimillion-dollar contracts to reinvent some of America’s most progressive educational workspaces. In particular, Buttle said he is proud to have already contributed to Hazleton community projects, transforming co-working incubators/learning centers such as the Hazleton Launchbox and the newly renovated CAN BE Innovation Center.

Talking about his plans for the West Hazleton facility, Buttle said Muzo will be showcasing state-of-the-art manufacturing and products. They plan on building an elaborate showroom, a working café and a spectacular outdoor area, where they will hold community events and entertain global customers, at the new facility. Buttle said the company plans on launching manufacturing and distribution in Valmont by February 1.

“This new development is a testament to how far we’ve come as a brand. We’ve evolved from a British furniture manufacturer into global leaders, re-educating the world on how to design learning spaces. We are part of the Hazleton community and proud to be here. This area is simply beautiful,” Buttle said.

He added, “I believe our presence will attract business visitors from across the USA and from all over the world. I have relocated here and I look forward to spending time enjoying the outdoor lifestyle in the Poconos. My sincere thanks to Joe Lettiere and the team at CAN DO. Joe’s passion for his community is infectious and CAN DO has played a huge role in attracting our company to invest in this area,” he said.

CAPTION: Muzo founder and CEO Darren Buttle stands in a portion of the company’s current showroom at its Drums facility. Muzo will be building a large showroom in its new building in the Valmont Industrial Park.