Congressman Matt Cartwright opens office in CAN DO Renaissance Center 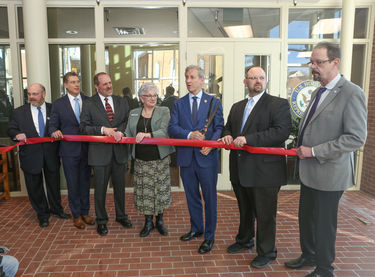 Congressman Matt Cartwright, a Democrat serving the 8th District, cut the ribbon on Thursday to officially open his new office in the CAN DO Renaissance Center at 1 South Church Street in Hazleton.

CAN DO Board of Directors Chairman Bill Magnotta served as master of ceremonies for the ribbon cutting event and Hazleton Mayor Jeff Cusat and Greater Hazleton Chamber of Commerce President Mary Malone gave remarks before Magnotta introduced Congressman Cartwright.

Rep. Cartwright is serving his third term in the U.S. House but his first term in the newly drawn 8th Congressional District. He was sworn into Congress on January 3, 2013, and has been committed to working across the aisle to advocate for working families. Cartwright's priorities include strengthening the middle class, creating jobs, ensuring quality health care, protecting seniors, and supporting veterans and military families. During his time in Congress, he has introduced more than 60 pieces of legislation and more bipartisan bills than any other House Democrat.