Dana DeLucca, who worked at CAN DO for nearly three years as the Administrative Assistant, will be moving to the Operations Department to serve as CAN DO's Operations Assistant.

In her role as Operations Assistant, DeLucca's primary responsibility will be to support CAN DO Director of Operations, Greg Kurtz, with administrative assistance and confidential support services. She will also provide support across the entire Operations Department, as well as the Business Development Department.

CAN DO President & CEO Joseph Lettiere said, “Dana will fit perfectly in the Operations Department. There is an inordinate amount of administrative analysis that has to be done with respect to our utilities, as well as building projects, that require a keen eye for detail. Her administrative experience within the CAN DO organization as a whole will serve the Operations Department well by providing much needed support.”

CAN DO held its annual Curb Appeal Awards ceremony to recognize the tenants across its five business and industrial parks who dedicate time and attention to beautifying their properties through landscaping and grounds maintenance.

That dedication to property maintenance was especially evident Thursday when EAM-Mosca was named the overall winner during the 14th annual awards ceremony, which was held at, and sponsored by, the Residence Inn by Marriott hotel in Humboldt Station.

Longtime EAM-Mosca employee Robert J. Rayno handles all of the company's landscaping work in addition to his duties as an employee at the machine manufacturing company in Valmont Industrial Park.

Nick Micene marks five years of service at CAN DO

Nick Micene recently marked his fifth anniversary as a member of CAN DO's operations staff.

Micene came to CAN DO in 2016 as a journeyman electrician with additional experience and knowledge in masonry. He was hired as a maintenance specialist and was promoted to Lead Maintenance Specialist in March of 2020.

CAN DO’s Director of Operations Greg Kurtz said, “Nick has done very well with us. He's learned a lot about our facilities, utilities, and other types of maintenance over his time with CAN DO. We're very excited for his continued growth with us.”

Melissa Frederick promoted to CAN DO Administrative Coordinator

CAN DO announced it has promoted Melissa Frederick to Administrative Coordinator. Prior to her promotion, Frederick served as CAN DO's Marketing Specialist since January of 2007. She joined the organization in September of 1999 as an office assistant and became a full-time marketing assistant the following August.

As the Administrative Coordinator, Frederick will be directly responsible to CAN DO President & CEO Joseph Lettiere and work closely with other management staff in assuring the completion of administrative responsibilities essential to the operation of the company. Her duties will also include office management, real estate support, serving as Assistant Secretary, and assisting with work for the CAN DO Community Foundation.

CAN BE is joining The Hazleton Innovation Collaborative (THInC) partners the Greater Hazleton Chamber of Commerce, Downtown Hazleton Alliance for Progress, The Hazleton Art League, Penn State Hazleton, The Hazleton Launchbox, Luzerne County Community College, and Lackawanna College to present Downtown Hazleton’s first-ever participation in Global Entrepreneurship Week, which is supported by the Kauffman Foundation and held from November 8-14.

Members of the Valmont Industrial Park Association, West Hazleton Borough, and CAN DO met Wednesday to discuss West Hazleton Brough’s plan for replacing the deteriorating bridge on Jaycee Drive in the industrial park.

Dominic J. Yannuzzi, PE, CM, a project manager with the engineering firm Benesch, outlined details of the steps being taken by West Hazleton to make extensive upgrades to the bridge which is tentatively scheduled to begin on or around October 1, 2021.

The Jaycee Drive bridge virtually cuts the (Valmont) industrial park in half with significant truck and employee traffic incurred by the nearly fifty industries in the park. The project will require detours with one entrance to the park serving the north side and another entrance serving the south side.

CAN DO recently honored former President & CEO Kevin O'Donnell for his 47 years of service with the organization at a retirement dinner at the Valley Country Club where family members, friends, former colleagues, economic development partners and acquaintances were in attendance.

CAN DO Board of Directors Chairman Charles Burkhardt presented O'Donnell with a resolution detailing O'Donnell's many accomplishments and accolades through his nearly five decades at CAN DO.

In addition to Burkhardt, CAN DO President & CEO Joseph Lettiere, former board chairman Donald Pachence, and O'Donnell's daughter Erin Rudalavage all gave speeches honoring Kevin, highlighting his career and outlining the impact he’s had on economic development in Greater Hazleton.

CAN DO Student Action Committee announces list of acceptable items for Operation: CAN DO drive

The CAN DO Student Action Committee announced the list of items it can accept as part of its 17th annual Operation: CAN DO drive.

Please keep in mind that in respect of religious beliefs and practices in places such as the Middle East, items containing pork cannot be accepted.

Items for the Operation: CAN DO drive will be collected through October 21 at schools throughout Greater Hazleton and at CAN BE, 103 Rotary Drive in West Hazleton. All donations collected by October 21 will be transported to the Freeland American Legion, where they will later be packaged for shipping overseas.

Some items appropriate for donation are listed below:

CAN DO seeking donations and names of military members serving overseas as part of the 17th annual Operation: CAN DO drive

The CAN DO Student Action Committee is seeking support from businesses and individuals across Greater Hazleton as it plans the 17th annual Operation: CAN DO drive.

Operation: CAN DO is an effort, in conjunction with the Freeland American Legion Post 473, that has its Student Action Committee members create care packages to send to those brave military service members with ties to Greater Hazleton who will be serving abroad during the holidays. The Student Action Committee, who spearheads this annual program with assistance from the Freeland American Legion Post 473, kicked off this year’s campaign by sending letters to area schools and businesses requesting goods or monetary donations for the care packages. The committee is also seeking the names and contact information of service members who would like to receive a package. 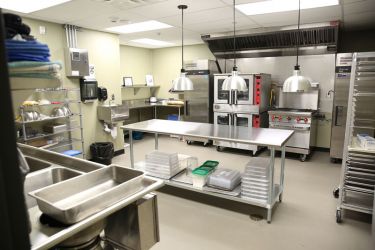 For entrepreneurs who dream of starting a business in the food industry, one of the biggest barriers to entry is having the resources and access to professional kitchen equipment. That's why the latest addition to Downtown Hazleton's entrepreneurial ecosystem is working to make it easier for people to start their own culinary business.

The Hazleton Kitchen Incubator, located inside the Hayden Family Center for the Arts at 31 West Broad Street, is the latest project from The Hazleton Innovation Collaborative (THInC) designed to help entrepreneurs and startup companies. The kitchen incubator program gives regional food and beverage businesses a low-risk opportunity to start small, test and develop a business idea and plan, and scale their operations without the cost of equipping and maintaining their own commercially-licensed culinary facility.