Highwood USA sees increase in demand for its outdoor furniture products, looking to expand its workforce 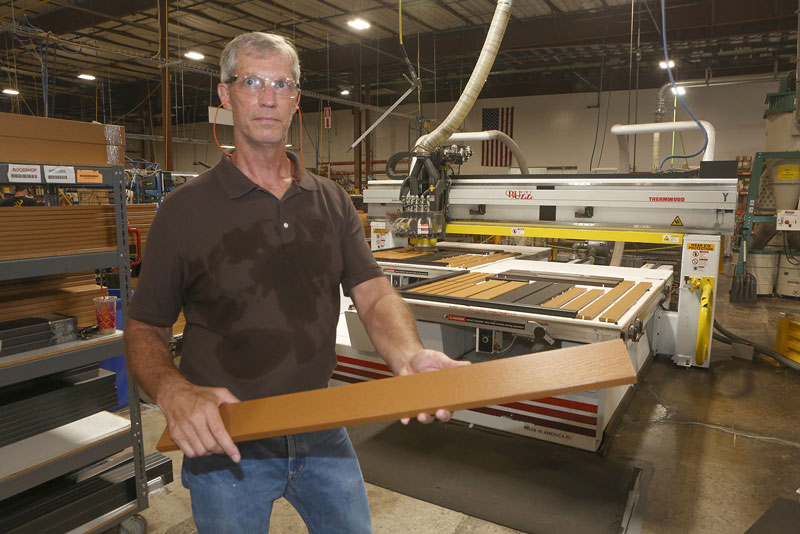 Industries and businesses around the world have certainly felt the effects of the COVID-19 pandemic, but at least one company with manufacturing facilities in Hazleton and Hometown has seen increases in product demand as more and more people choose to shelter at home.

Highwood USA, a manufacturer of synthetic outdoor living products touted as a low maintenance realistic alternative to real wood, is experiencing higher demand for their outdoor furniture products. “The recent issues actually have helped us because people are staying home and demand is very high. With everyone not going out to dinner, not going to the movies, not getting their nails done, not going on vacation, everyone in the country has turned to their backyard, so our furniture sales have been extremely strong,” said John Quarmley, Highwood’s chief operating officer.

Highwood was founded in 2003 and began operations in 2004 at their Hometown location. As the company grew, the need for additional manufacturing space became a priority and in 2017 they chose an existing building on Conahan Drive in the Heights section of the City of Hazleton.

Quarmley said it was CAN DO and the Pennsylvania Governor’s Action Team that assisted Highwood with finding the location and obtaining financial incentives that enabled the company to make the expansion into Hazleton.

“CAN DO has been very helpful along the way not only with finding the property but also by helping us navigate some of the local permitting and other processes. When we bought that building in October of 2017 it had a lot of deferred maintenance and we ended up putting just shy of $2 million into that building over the course of six months. CAN DO helped by guiding us in all of those different decisions. More recently, we've been focused on improving our logistics and fulfillment operations and CAN DO connected us with a number of other companies in the area where we could go in and benchmark their operations against ours and learn what tips and different things they've discovered over the years that we could apply in improving our operations,” Quarmley said.

With strong growth of 15 to 19 percent each year over the past five years, Highwood is in need of expanding its workforce. “We're looking at next year and saying what do we need to support the growth that we expect. We actually have 42 new openings we want to fill in technician roles for 2021. We've got three customer service roles, we have team leader positions, and we have operations management positions that we want to fill. Our growth that we're driving through new products and new markets we launched in the past year has necessitated that we begin hiring new team members now,” he said.

“Our goal is to have these people on board this fall so that that they can be trained and ready for when we get to 2021. So yes, absolutely 100 percent we're actively recruiting. In every part of our manufacturing operation, actually in every part of the operation, we employ high-performance work teams So when we look for team members, we need people that can work well in a team environment,” he said.

CAN DO President and CEO Kevin O’Donnell commended Highwood on its success in Hometown and here in Hazleton. “It’s great to hear that Highwood is growing and will be increasing its workforce, especially in these trying times. We’re proud to have played a role in attracting this company to the City of Hazleton and for providing assistance as the company needed it along the way.”

“So, we supply a lot of material to companies that make furniture for Disney. We also supply some lumber directly to Disney that they'll use for building various things. I mean literally every Disney park in the world has furniture made from Highwood material. In fact, we've had employees on vacation in Shanghai and visited the Disney park and there's Highwood furniture in the Shanghai Disney park,” Quarmley said.

Looking to the future, Quarmley said Highwood is already beginning to run out of room and he expects that in a few years the company will be looking at expanding one of its facilities. “We have several acres at each facility where we could accomplish that,” he said.

For more information about a career at Highwood USA, visit www.highwood-usa.com/pages/careers.