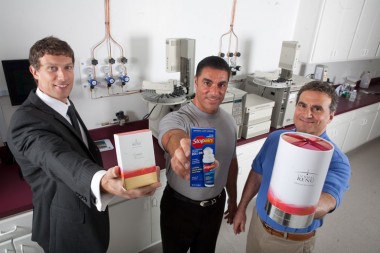 When CAN DO stepped up the plate almost 10 years ago to assist a company looking to relocate from New York state to the Hazleton area, the agency put its full force behind the plan and today considers this project to be a perfect illustration of how economic development should work.

[View television news video of this story from SSPTV]

The owners of Troy Manufacturing, Inc., needed a building. They needed financing. They needed someone who believed in their vision of a company that would produce pharmaceutical and cosmetic products for other companies and eventually for their business as well.

CAN DO President Kevin O’Donnell and the CAN DO Board of Directors were believers. The economic development agency provided space in one of its multi-tenant buildings. They lent the company the money to renovate the facility to Food and Drug Administration (FDA) standards. And they never doubted the owners’ dreams.

Now, nearly 10 years later, Troy has gone through several expansions and has developed products that have made their way into the hands and onto the faces of thousands of people around the county including Hollywood celebrities.

Dermal Renu products have been featured at the Sundance Film Festival, on the ABC television special “The Bachelor Wedding: Molly and Jason” and on the TLC/WE mini-series “Designing Beauty Spaces.” The products have also been distributed to celebrities such as reality television stars Kourtney and Kim Kardashian and Khloe Kardashian Odom, stars of the shows “Keeping Up with the Kardashians” and “Kourtney and Khloe Take Miami.”

Troy Manufacturing was founded in Liverpool, N.Y., in 1997 by Thomas Cicini and his brother, Anthony. As the business began to outgrow the facility, the brothers began looking for a new home and considered moving closer to their hometown of Berwick.

That’s when the Cicini brothers found CAN DO and the Valmont Industrial Park.

“We not only needed a larger facility but we also needed financial assistance that would allow us to continue to expand and grow our business,” said Anthony Cicini, vice president of Wellness Formulations. “CAN DO was a perfect fit and helped us every step of the way. They gave us low-interest loans to help us renovate the facility. They also helped us by providing a very low lease rate that gradually increased along with our business, and they provided an ideal location in a building that was already constructed and was close to Interstates 80 and 81.”

CAN DO Vice President of Sales and Marketing Joseph Lettiere said he is proud of the Cicinis’ success and is happy that CAN DO was able to play a role. “CAN DO is committed to bringing a variety of industry and jobs to the area. We took a chance on Troy Manufacturing, and we’re excited to see how much the company has grown since first coming to Greater Hazleton.

“These are the type of success stories that really make us proud of what we can do to help small businesses become big businesses,” Lettiere said. And Thomas Cicini is quick to acknowledge the importance of CAN DO’s assistance. “There’s no way we could have achieved this level of success without CAN DO’s help,” he said.

Speaking of success, Troy Manufacturing’s story doesn’t end with Dermal Renu. In fact, the company is the manufacturer of a product called Stopain®, an over-the-counter spray and roll-on product for arthritis and muscle pain. The products are being sold across the county at stores such as CVS, Rite Aid, Walgreens and Walmart.

The Cicinis recently purchased the Stopain® product line from its previous owners. They had already been manufacturing the product for the past seven years.

“Troy began as a company that manufactured products for other companies, but with Wellness Formulations and now Stopain® we have made a transition to owning the brands ourselves,” Anthony Cicini said.

When Troy Manufacturing first moved here, the company originally leased 40,000 square feet in Valmont. Now, Troy Manufacturing and Wellness Formulations occupy about 80,000 square feet between two buildings purchased from CAN DO and have about 40 employees, including several chemists. The company has been named among the Best Places to Work in Pennsylvania for the past four years.

“From the very beginning, we hoped to get to this point. We wanted to build a foundation that would allow us to move forward in this direction,” Thomas Cicini said.

Even with the success of Dermal Renu® and Stopain®, Troy continues to explore new products. In April, Wellness Formulations began selling Sunshield, a daily-wear mineral-based sunscreen that was previously only available as part of a special package on a national television campaign.

Just as CAN DO assisted Troy Manufacturing during its initial period of growth, the economic development agency continues to provide much-needed assistance to other start-up businesses.

Several years ago, CAN DO, joining forces with Ben Franklin Technology Partners, Penn State Hazleton, Luzerne County, PPL and other organizations, launched a business incubator program in the Valmont Industrial Park. They founded CAN BE, the Community Association for New Business Entrepreneurship, which operates the Greater Hazleton Business Innovation Center in Valmont Industrial Park.

“We are always looking to assist entrepreneurs with good ideas who need help turning their ideas into businesses,” he said.