PECO Pallet and E.S. Kluft have recently leased space in CAN DO’s largest industrial park, Humboldt Industrial Park, while GENCO has expanded its facility in the park for the second time.

PECO Pallet and E.S. Kluft leased space at 1104 N. Park Drive in Hazle Township from Mericle Commercial Real Estate. The building was constructed on speculation and is now completely full. 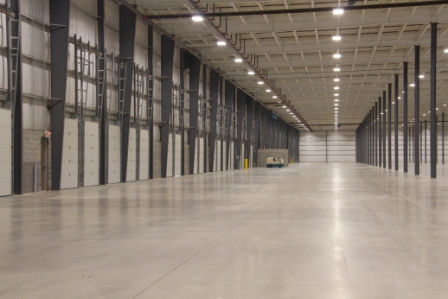 PECO Pallet, headquartered in Yonkers, N.Y., is a national leader in pallet rental services and provides millions of high-quality block pallets to major grocery and consumer goods manufacturers throughout North America. The company has leased nearly 99,000 square feet in Mericle’s facility and began operations there at the beginning of January.

PECO Pallet will create 48 new jobs by early July, according to Ed Jordan, director of field operations in North America.

He said that when determining where to locate the new facility, PECO Pallet in particular sought good transportation lanes and proximity to customers.

“We drew a bull’s eye around Harrisburg, Allentown and Hazleton. Hazleton was very attractive to us because it was in that bull’s eye. The convergence of Interstates 80 and 81 and the Keystone Opportunity Zone tax incentives made an attractive location even more attractive,” Jordan said.

After conducting site visits at several locations, the company chose Mericle’s facility for several reasons, including the tax advantages and the newness of the building.

“We were very impressed by the industrial park and everything that went with it. Also, after meeting with Mericle officials, we were excited by what our partnership would look like going forward,” Jordan said.

“As customer demand dictates, in a couple of years, I anticipate having multiple shifts and a full complement of employees on each shift,” he said.

E.S. Kluft, manufacturer and distributor of luxury Aireloom and Kluft mattresses and based in California, has leased almost 99,000 square feet in the 1104 N. Park Drive facility.

The company began operations in that location in late October and has about 40 employees.

“The three main draws of this area were the location between Interstates 81 and 80, which works very well for us; the Keystone Opportunity Zone program; and the workforce in the Hazleton area, which is very good,” said General Manager Steve Boucher.

He said the company looked at several buildings, considering either purchase or lease options.

“Overall, Mericle’s building met our needs well, especially in terms of location and size. It is a good fit for the type of manufacturing we do,” he said.

E.S. Kluft used the assistance of the PA CareerLink to find applicants and employees and was able to conduct interviews at the CareerLink offices.

“Hiring people was not an issue at all. We received hundreds of applications for the positions we had available and have maintained most of the people we initially hired,” Boucher said.

“Our new hires ranged from having no skills in this area at all to very proficient. I am happy to say that the employees caught on really well to what we do and what we are looking for in terms of quality and efficiency,” Boucher said.

He described the employees as “very good” and said the company plans to add 20 percent more employees to its local workforce within a few months. When the plant reaches full capacity, he estimated, about 100 people will work at E.S. Kluft in Hazle Township.

GENCO, one of the nation’s largest third-party logistics companies, expanded its operations in Humboldt Industrial Park for the second time in less than four months.

GENCO, North America’s second-largest and a global top 25 third-party logistics provider, manages more than 38 million square feet of warehouse space at 130 operations and more than $1.5 billion in transportation annually throughout the United States, Canada and Mexico. Founded in 1898 and headquartered in Pittsburgh, GENCO is a privately held company with more than 10,000 employees.

Mericle Vice President Bill Jones said that with Mericle’s existing space in Humboldt Industrial Park filling quickly, the developer will focus its attention on converting parcels it owns in the park into Ready to Go Sites. Mericle’s Humboldt sites are located along Oak Ridge Road and can accommodate companies needing buildings from 300,000 square feet to 1.5 million square feet.

CAN DO Vice President of Sales and Marketing Joseph Lettiere said, “The openings of PECO Pallet and E.S. Kluft and the expansion of GENCO show that more companies are realizing what we already know: that their facilities will be profitable within the Hazleton market. They are seeing the advantages of Greater Hazleton in not only its location and tax incentives but also the workforce and we welcome them to Humboldt Industrial Park.”