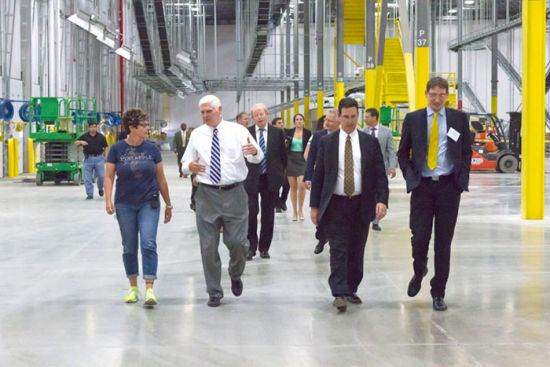 The authorized investment representatives, based in countries including Brazil, France, Italy, Germany, India, Taiwan, Japan, the United Kingdom and Australia, work to help DCED and regional economic development organizations bring new businesses to Pennsylvania and foster collaboration between foreign and Pennsylvania businesses. Along with DCED executives who work in Pennsylvania, they toured each region in Pennsylvania, learning more about some of the state’s notable companies and facilities.

The local tour, arranged by local economic development organization Penn’s Northeast in partnership with CAN DO, included the CAN DO Corporate Center in Drums and American Eagle Outfitters’ DC in Humboldt. The DCED staffers met with economic development representatives during lunch at Theodora’s, learning more about available properties in northeastern Pennsylvania, the benefits of operating a business in the area and how the representatives play a key role in the plans Penn’s Northeast has for the region.

American Eagle Outfitters’ one million square foot facility is the largest in any of CAN DO’s parks and is among the largest in northeastern Pennsylvania. The Company plans to hire 100 full-time employees, 400 seasonal employees and have more than 600 associates working at the DC when it is at full operation. The facility is a direct-to-consumer DC housed on 128 acres of land.

“It’s truly amazing how the American Eagle Outfitters facility operates, with one of the most notable aspects being the automation inside. Everything comes in on trucks and is immediately loaded onto conveyors, which are used to transport the products inside the building instead of forklifts. Each product is computer coded during its travels,” said CAN DO President Kevin O’Donnell.

Bridgette Nealon, Penn’s Northeast marketing manager, said, “The DCED representatives were very interested in the American Eagle Outfitters facility. They were all asking questions throughout the tour, taking photos on their phones to share with colleagues and commenting how impressed they were. Many of them couldn’t believe the size of it.”
O’Donnell explained that the tour is designed to expose Pennsylvania and its business community to the world, with the DCED representatives acting as a conduit between Pennsylvania businesses and those elsewhere in the world.
“Most of them had never seen what’s available in Pennsylvania. We were fortunate they were able to come here and learn more about the Hazleton area, which we hope will lead to additional job creation in our region,” he said.

Ron Maloney, president of Penn’s Northeast, thought the day was a great success. “DCED and these representatives are very focused on bringing new industry to Pennsylvania. It is much more effective when they understand firsthand our region’s strategies. This tour gave them the advantage of seeing this incredible facility with their own eyes. Now, they know what types of businesses we are looking to attract to our region, and how we’re going to do it. They can now share their firsthand experience of visiting American Eagle Outfitters and Greater Hazleton with business leaders throughout the world,” he said.